One of my earliest childhood influences was “The Golden Book of Astronomy” (1955). To this day, I recall this particular illustration from that work, showing American astronauts exploring the Moon, as particularly interesting and inspiring. But even back then, I wondered what the initials “USSC” on the rocket’s fin signified. Eventually, I decided it must mean “United States Space Command”, a suitable name for the branch of the US armed forces charged with operating in outer space.

Today, “USSC” is the name of the interservice unified command charged with combined forces and units from all the armed services assigned to military operations in space. It is my understanding that there are eleven “Commands” like this under Pentagon control, each consisting of allied and cooperating formations from several of the armed services tasked with a particular combined arms mission. For example, the Special Operations Command coordinates interservice assets (intelligence, training, infantry, aircraft, communications, logistics) used in commando raids. Among other things, the Space Command might coordinate missiles fired from Navy ships which target hostile foreign military satellites tracked by Air Force radars. When different military services work together, differences in their command structures and communications protocols require well-rehearsed interfaces and highly integrated chains of command with well-defined boundaries. Otherwise, colossal fuck-ups tend to occur.

Presumably, USSC and its missions will be replaced and absorbed by the newly created “United States Space Force”, a totally new branch of the armed forces, which will soon join the Coast Guard, Navy, Army and Air Force. (Sorry, Jarheads, but the US Marine Corps are administered under the Department of the Navy. Semper Fi.)

Too bad about the Space Farce (forgive me, but the characterization is inevitable) but I think “US Space Command” has a nicer ring to it, and fits in with the names of the existing services much better. Besides, there already exists an existing administrative structure, complete with its headquarters and chain of command, that could form a nucleus around which the new service could coalesce. And they wouldn’t even have to order new stationary. 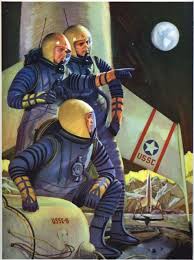