The rate of Arctic sea ice loss was somewhat slow through much of July, lowering prospects for a new record low minimum extent in September. The month as a whole was marked by widespread low pressure over most of the Arctic Ocean, which was much more extensive than recorded for June.

Maybe, but let’s wait for the mid-September ice minimum and see what happens… 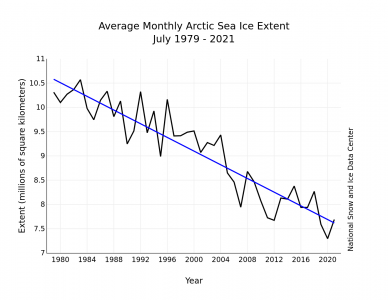 Through 2021, the linear rate of decline for July sea ice extent is 7.5 percent per decade. This corresponds to 70,500 square kilometers (27,200 square miles) per year. The cumulative July ice loss over the 43-year satellite record is 2.96 million square kilometers (1.14 million square miles) based on the difference in linear trend values in 2021 and 1979. The loss of ice in July since 1979 is equivalent to about ten times the size of Arizona.