“Multiyear ice” is Arctic sea ice that survived the summer melt season and lingers on to provide the nucleus for new sea ice formation the following fall and winter.
Think of it as the “permanent” ice in the icecap.

While the multiyear ice that advected into the Beaufort Sea has helped to stabilize ice loss in that region, multiyear ice for 2021 in the Arctic as a whole is at a record low. Based on ice age classification, the proportion of multiyear ice in the Arctic during the first week of August is at 1.6 million square kilometers (618,000 million square miles). The loss of the multiyear ice since the early 1980s started in earnest after the 2007 record low minimum sea ice cover that summer, and while there have been slight recoveries since then, it has not recovered to values seen in the 1980s, 1990s, or early 2000s. This loss of the oldest and thickest ice in the Arctic Ocean is one of the reasons why the summer sea ice extent has not recovered, even when weather conditions are favorable for ice retention. 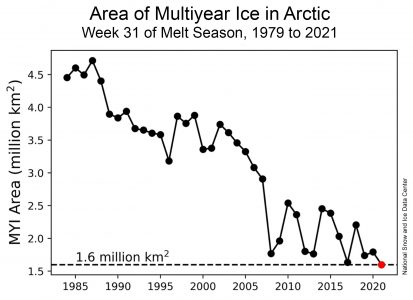 Figure 4a. This graph shows the near record-low amount of multiyear ice in the Arctic as of week 31 (July 30 to August 5) of the 2021 melt season, comparing this year to the same week in previous years of the satellite record that began in 1979. Historical data through 2020 are provided by Tschudi et al., 2019a and quicklook data for 2021 by Tschudi et al., 2019b